For any technical issues of the website, pleaseCONTACT US

Enter your email and we will email you instructions for resetting your password.

Go back toLOG IN or For any technical issues of the website, pleaseCONTACT US

COVID-19, labour markets and the green economy in the Tropics

As the United Nations Climate Change Conference (COP26) wrapped up in Glasgow with new rules on limiting greenhouse gas emissions, the stakes couldn’t have been higher for countries in the Tropics, which are located between the Tropics of Cancer and Capricorn. The Tropics account for some 43 per cent of the world’s population (which is projected to rise to more than 50 per cent by 2050) while accounting for 80 per cent of the world’s territorial biodiversity and most of its marine diversity (State of the Tropics, 2020). While the Tropics have historically made only made a very small contribution to global greenhouse emissions, they stand to bear much of the costs of climate change: rising temperatures there, combined with high humidity, impacts the body’s ability to evaporate sweat and cool itself and could potentially push the Tropics beyond the limit of human survival if temperatures rise above a certain level (Zhang et al. 2021). Even prior to reaching such a lethal point however, there will be repercussions from rising temperatures on productivity and occupational health: for example, some 2.0 per cent of total global hours of work, equivalent to 72 million full-time jobs, could be lost as a result of heat stress under a scenario in which the global temperature rise is kept to 1.5°C by the end of the twenty-first century (ILO, 2018).

Today, countries in the Tropics are suffering not only from periodic extreme heat stress but also from the fallout of the COVID-19 pandemic. The recent ILO Monitor on COVD-19 and the World of Work highlighted the divergence between countries on the impact and recovery from the pandemic, with lower-middle income and lower-income countries continuing to suffer losses in working hours whereas high and middle income countries have tended to recover in 2021 (ILO, 2021a). With almost all countries in the Tropics being developing countries, this divergence is also reflected between the Tropics and the rest of the world. While global employment is estimated to have declined by -3.5 per cent in 2020 compared to the previous year as a result of the pandemic, employment fell by -4.3 per cent in the Tropics, with employment in Latin American tropical countries falling by a high of -9.5 per cent (figure 1). The severity of the labour market fallout during the pandemic is particularly noteworthy when compared to the impacts of the 2008-9 global economic crisis, during which employment continued to grow albeit at a lower rate. 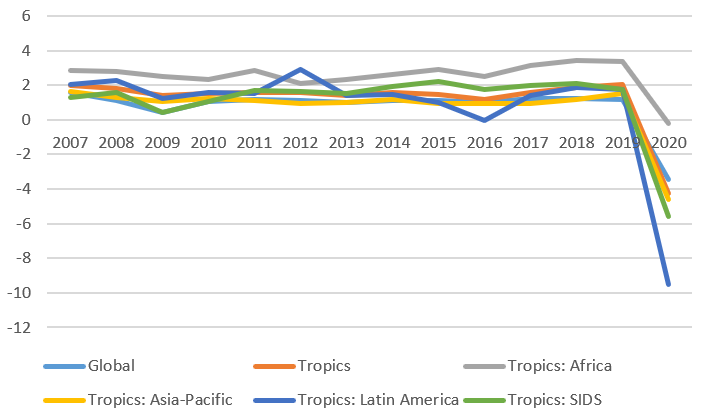 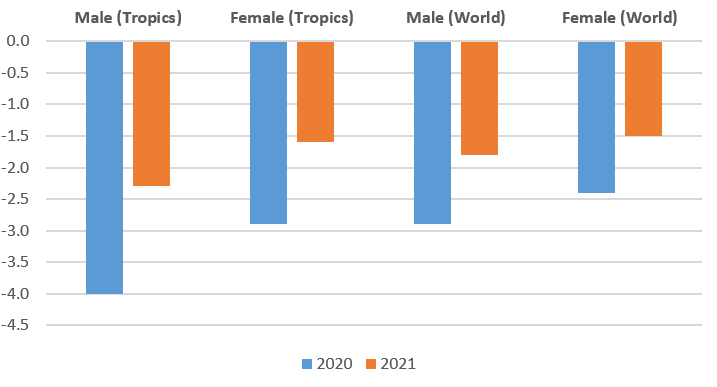 These developments in labour markets have hit the 676 million young women and men aged 15-24 in the Tropics (who account for 56 per cent of the global youth population) particularly hard, whether in terms of disrupted learning and job search or job, working hour and income losses (see ILO, 2021b for an in-depth analysis of the labour market impacts of COVID-19 on youth). Even prior to the pandemic, rates of youth not in employment, education or training (NEET) in the Tropics were higher than the global average, with NEET rates highest in the Tropical communities of Asia and the Pacific (figure 3). 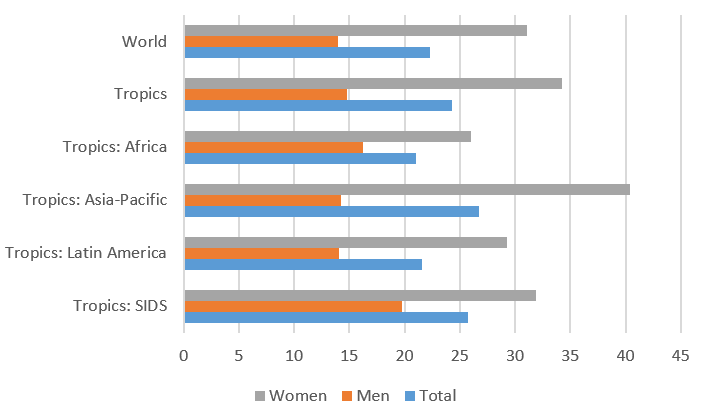 With the Tropics and the world facing both a youth employment crisis and an environmental crisis, the transition to a green and blue economy can support countries tackle climate change and biodiversity loss, while at the same time potentially generating millions of decent employment opportunities for young people. But catalysing green and blue transformations, and in the process reaping the dividends, will not be automatic – critically it will depend on well-designed policies, conceived on the basis of social dialogue, to direct the transformations to be just and inclusive not only across tropical and non-tropical regions, but also across generations.

This article is based on a presentation given by the author at the 2021 International Conference on Tropical Sciences (TropSC 2021).

Ministry of Foreign Affairs of the Netherlands